The Tradition Of Handfasting 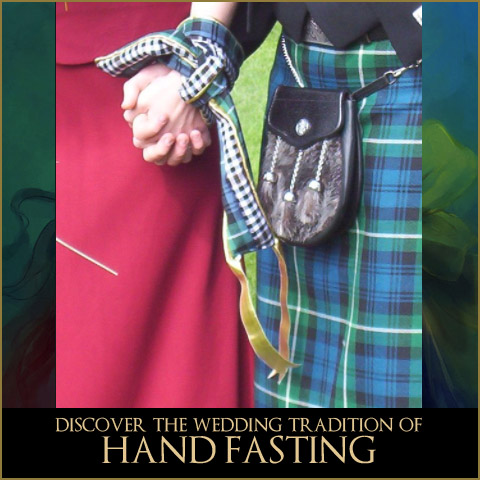 These days, contemporary Celts, neo-pagans and others interested in alternative marriage ceremonies have adopted the tradition of handfasting, which involves binding the hands of the couple with ribbon or cord in a public to symbolize marriage vows.

The tradition itself, however, is to believe to be ancient, deriving from Celtic tribes that were widespread in Europe before Christianity. Since that time, handfasting has been a practiced over generations, with many variations. The term, handfasting, is from late medieval times, deriving from Old Norse: hand-festa, which means to strike a bargain by joining hands. The notion of a handshake comes from the old tradition of hand fasting; and even today, let’s shake on it, can represent a vow of sorts.

Similarly, handfasting, represents a commitment in context to a more intimate partnership for a limited time or for a lifetime. The practice was well known in Scotland, and we find early documentation from the middle ages to the early 17th century. Back then, handfasting was used for marriage by mutual consent, without the church. Couples merely needed to exchange vows. Witnesses were not absolutely necessary, though they made it easier to prove the marriage. There was also was the practice of marriage by habit without formal vows. This is similar to what we call “common law” marriage today. People simply lived together and became a couple.

The church did not like marriages that took place outside of their institutional structures. Though they recognized clandestine marriages as fact, they regarded common marriages as not “sanctified” and therefore, “sinful”. They encouraged such couples to be married again in the church. Back then, as in today, friction existed around the issue of marriage. The 1939 Marriage act of Scotland abolished the formal legitimacy of handfasting, though people continued to use the tradition in marriage ceremonies.The scholar, A.E. Anton, had a different take on handfasting, writing, “The real medieval practice was that handfasting was a synonym for betrothal, that is, for getting engaged to be married.”

Handfasting was essentially a promise that the marriage would occur at some later date. It was kind of like getting an engagement ring, without the ring. The promise to be married was in some respects as good as getting married, because the couple would then be permitted (in the eyes of society) to have legitimate sex.

From the late seventeen hundreds and into the beginning of the last century, handfasting had an entirely different meaning, perpetuated by Sir Walter Scot’s novel, The Monastery. A handfasting ceremony came to mean that the couple would commit to a marriage for a year and a day. Scot was said to find this information about handfasting in an obscure text that modern scholars have not been able to locate. Since that time, among some people, handfasting has been utilized as a kind of short term commitment, a time in which you can try on marriage and shack up together.

Finally, tradition of handfasting may be more widespread through cultures than many people assume. A few years back I witnessed a wedding which took place in a circle conducted by a Native American Medicine woman who used handfasting. She said it was part of her own tradition. The ceremony took place in nature. Many people prefer to do handfasting commitments is in the warmer times of year, particularly spring and summer, when the ceremony can be held in nature.

Today, the place of handfasting in a ceremony depends a lot upon the couple and who officiates the marriage. What is most appealing to many is that the tradition is simple, beautiful and counter cultural—with a rich tradition outside of religious institutions.