A Solstice Story: First Kiss Under The Mistletoe 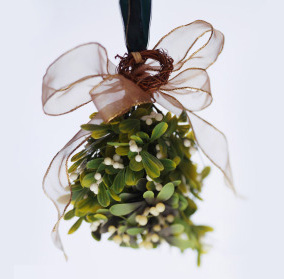 Long, long ago, when those who tracked the earth knew they were made of star light...when gods and goddesses lived among us, whispering between the beats of our hearts...Frigga, the Norse sky goddess, stood under the mistletoe. She kissed all who stepped beneath the sacred plant, crying tears of happiness and celebration for the resurrection of Balder, the god of the summer sun. Balder was the son of Frigga. He had had a prophetic dream of his impending death.

Frigga knew that with his passing, there would be no summer light, but only darkness.  All life on earth would shrivel and turn to dust.  Frigga traveled through all the worlds, air, earth, water, fire—to every plant, four legged, insect, and fish in the sea.  All promised not to harm her son.  She felt safe. But Loki, the god of evil, the keeper of duality, knew of one plant she had forgotten—the lowly mistletoe, evergreen, vibrant, growing from the heart of the ancient oaks and apple trees.  Loki created an arrow from the mistletoe, and gave it to Hoder, the god of winter.  In the frozen darkness, the Hoder drew his long bow, aimed carefully at the summer sun and let loose.  The arrow traveled through the heavens, and struck true.  Balder fell from the sky, sank into the heart of the earth—the light extinguished in an ancient caldron,  where the oldest woman of all was stirring her bone soup, stirring, stirring all the bones that had ever been and will ever be. All was dark.

And in the darkness, all that lived and loved on earth cried out in hunger, fear and confusion.  Even the stones wept red tears.  The great goddess Frigga.. the one who would weave clouds,  pushing winds through the endless waves of light…the all powerful…  her very breath, the movement of her spindle determined fate, the success or failure of crops, the future of men and women… she now, was utterly broken. She lifted the body of her son, merely a round pile of dark ash, held it close to her breast,  breathed into him.

And the sky wept tears and the earth was covered in tears.  From sparks in the fury of grief,  a tiny sphere of light appeared in the heart of the summer sun.  Ignited by Frigga’s breath, the tiny flame grew larger and larger.  Balder appeared reborn in his radiant glory The tears themselves became the white pearl berries of the mistletoe and a tradition, in remembrance of an ancient truth was born.  Love conquers death and the light always returns. And through the centuries, even to these days, there is a tradition of kissing under the mistletoe. We think we are honoring love, romance and bringing light to a dark time of year, and all this is true.

But the part of us that still remembers a time when we were made of starlight, when the gods and goddesses walked among us, honor of Frigga and Balder with this tradition.  For the love between mother and son… for the love between the goddess and all that lives and breathes—even the rocks and stones-- anyone who stands beneath the mistletoe receives a kiss that brings light and regenerative joy.