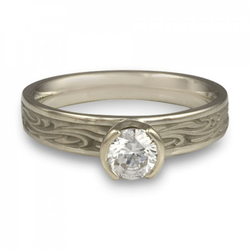 The diamond—a pure, essential form of carbon set in a ring and held by a man on his knees—represents commitment, fidelity and the beauty of matrimony. But the diamond has other traditions and uses as well, long forgotten.

Though it is a gem of winter, the color of ice, Diamond is a crystal of Light; its high frequency energy is dispersed into flashing prisms of brilliant “fire” that typifies the sun. It is a spiritual stone, a symbol of perfection and illumination, activating the Crown and Etheric Chakras. It enhances inner vision and stimulates creativity, imagination, and ingenuity, opening the mind to the “new” and “possible.” Placed on the Third Eye, a Diamond encourages psychic development, and is a valuable tool for remote viewing, telepathic communication and clairvoyance.

In addition to its spiritual power, Diamond has an unconquerable hardness and has been known since antiquity as a “Stone of Invincibility,” bringing victory, superior strength, fortitude and courage to its wearer. It is associated with lightning and fearlessness, and for its properties of protection. It is a symbol of wealth and manifesting abundance in one’s life, an amplifier of energies, goals and intent, and is highly effective in magnifying the vibrations of other crystals for healing. It is particularly beneficial set in gold and worn on the left arm.

The Greek term for diamond is adamas, which means "invincible" or "extreme hardness." The Hebrew word yaholom among some translators also means diamond. Yaholom is one of the gems on the breast place of the high priest Aaron, which is the original source of birthstones. However, it is unlikely that a diamond, given its hardness, was on this breast plate-- because the gemstones were inscribed with the names of the twelve tribes of Israel (Kuntz 76).

Diamonds have a long and illustrious history which is described in many ancient texts. The oldest Arab writings on mineralogy (350 BC) describe how Alexander the Great sought the valley of the diamonds: "It lies in the East… and is so deep that human eyes cannot see the bottom" (Kuntz 89). Tales of diamonds often appeared in early mystic allegories such as Voyages of Sinbad. Roman poets too extolled the mythical qualities of diamonds for their raw power. Damigeron states, "When you have obtained it, it will make you unconquerable by enemies, opponents and evil doers, and over bearing men, for you will be shone terrible in every way" (Kuntz 80).

Back then, diamonds were sourced only out of India, where Hindu priests, astrologers and physicians recognized their qualities. The ancient Vedic text tells of a story in which a demon god, Vela, was dismembered by demigods. The bones were stripped of flesh, ground, and spread out over the earth, where their fragments created diamonds. A diamond's color represents a particular god in the Hindu pantheon. This implies that each colored diamond has its own unique characteristic, representing a divine quality. This notion of divinity having multiple pure qualities is also echoed in Sufism, the mystical Islamic tradition with its ninety-nine names of God.

Human beings and diamonds share one thing in common: both are made of carbon. But the similarity pretty much ends there, at least for most of the people I hang out with—until we all reach our true and enlightened state. The school of Buddhism coming out of Tibet is called the "Vajrayana," which roughly translates to the diamond path. The tantric practices aim to root your "Buddha" nature, the consciousness that is pure, luminous, unimpeded and changeless, like a diamond. This is done by turning the mind against itself, like changing the course of a river so that it comes back on itself.

Diamonds are now considered the king of gems, though this was not always the case. Diamonds were not even popular in Europe until relatively modern times. For centuries, they were confused with clear quartz. Their recognition as exceptional came in middle ages, when astrologers began to write about the qualities of the gem, often drawing on references from ancient texts. Even then, diamonds were not readily available until the late middle ages and were associated with lightening strikes. As the lore of the stone increased, they become fashionable, representing courage and invincibility among some aristocracy.

Until modern times, with the advent of the DeBeer's marketing campaign, colored gemstone, such as rubies, sapphires and emeralds were far more sought after than diamonds. Diamonds were also not historically associated with marriage. These days, the jewelry sector derives over fifty percent of its revenues from diamond sales. Marketing of them is has been so intense over the last hundred or so years that it is difficult to separate the myth and lore of diamonds from the commercial horse, pony, and glamor show.

Much has been written about our current lore of diamonds, with its history of colonialism, corporate greed and sleazy marketing tainted by blood. This is not the fault of diamonds, but rather those who have forgotten their humanity and the nature of this miraculous gem. Diamonds, and most of those who mine them, are even today treated like a commodity. But even the recent historical events in the diamond trade attest to the power of diamonds which stretches back thousands of years.

It was widely held that the power of a diamond was lost if the stone was purchased; only when it was received as a gift did it maintain is talismanic power. If we view the earth as that which gifts our diamonds, it is yet another reason why you might want ethically-sourced diamonds for your engagement ring. But recent events teach another lesson about this king of gems. If we do not honor power of diamonds, we are liable to be consumed by their shadow side, which has brought out the worst of humanity.

References: Most of the historical content, myth and lore referenced in this article came from :