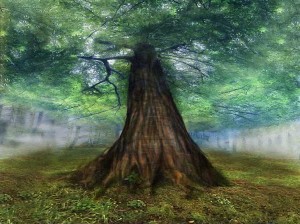 Now, the dark pockets of earth begin to stir awake from the long and frozen cold. The energy of the earth is rising up. Walking through the woods, we can feel in our bones the change in the earth—the lengthening of the days, the wind that contains a hint of spring. This is a time of awaking from a long and quiet dream.

If you have done your work, the seeds of inspiration are firmly planted; the luminosity of the eastern light of spring is not far away. We pay tribute to the Ash tree, one of the most sacred of all trees to the Celts. In Celtic myth and lore, the Ash originated from the deepest realm of the Undersea—and holds a certain medicine or quality that pertains to this time of year.

Ash is a strong and magnificent tree, regarded with such awe in many Celtic countries that many people refused to cut it—though ultimately the wood was widely used. It can grow well over a hundred and thirty feet high—with broad crowns almost that size—and has brown-grey bark furrowed in a diamond pattern. Ash, the abode of fairies, was often associated as a world tree, cosmic axis, the tree of life. It spanned the holy waters, traveling from the lower world of Hades (or Fairyland, Annwn) to our middle world, Abred, where we live in a probationary state; to the upperworld, Gwynvid, which is liberty; and finally touching even Ceugant, the infinite.

It is no surprise, then, that Ash was commonly used as a center pole in Beltane ceremonies—the dance around the May pole was a way of relating to life, from the center of the earth to the infinity of the heavens. Witches created their besom broom stick from this sacred wood—the Ash as a world axis made it a natural ally in their shamanic journeys (riding the broom stick).

There have been archeological discoveries of Ash wands carved with spirals that were possibly created by Druids in Wales. Warriors and hunters made spears from Ash, and twigs were placed under a pillow to inspire prophetic visions and dreams. The sap from Ash was used as medicine to protect children from sorcery. Seeds from Ash were used for divination, and were associated with both enchantment and healing. Even in North America, Ash was recognized as a powerful tree by Native Americans—as it was the preferred wood used by initiates to make the stem of the sacred pipe. In contemporary pop culture, Gandolf from The Lord of the Rings uses an Ash staff.

Do you understand now how Ash is a kind of essential medicine for this time of year? As we grow into a new vision for our year, what is more important than finding our own inner axis and alignment to the tree of life? Finding our true orientation, with the help of Ash, supports our work in the world in a manner that honors our both our human and non-human relations, as well as our Celtic ancestors.