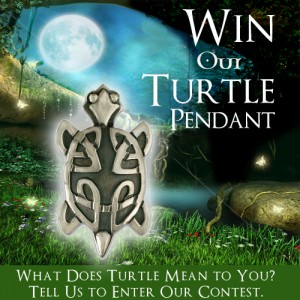 In Celtic history and lore the turtle is known as the keeper to the doors of the faerie realm. Turtles sense vibrations through water and through their skin and shell, they are amazing survivors; with very good hearing and sense of smell. From "Animal Speak" by Ted Andrews, "If turtle has shown up, it is time to get connected to your most primal essence. Go within your shell and come out when your ideas are ready to be expressed. It is time to recognize that there is an abundance out there for you." In the modern story of the tortoise and the hare, the turtle represents patience, tenacity, and longevity. The turtle uses its hard exterior shell as a means to carry the troubles of the world on its back, as well as to protect itself from harm. The turtle is an earth wanderer, grounded, and sure in its footing.


Contest Winner: Tell Us What the Turtle Means To You

We asked you to tell us what Turtle means to you, both here and on our Facebook page, and there were so many interesting and heartfelt stories. The one that captured our hearts the most is by S. Treadwell, whose winning post is this:

"I am a member of the Long Island Unkechaug, a tribe of fisherman who were 'the turtle clan' and saw the turtle in our native lore as the bedrock under the oceans that created the continents that we live on. The "mother earth" to many is the back of a massive sea turtle, with the dirt and ground being what she pulled up from the depths of the ocean so we could live. It is a powerful, spiritual, and very significant symbol in Native american lore, especially to my tribe."

He reminds me that slow is ok because I will get to my journeys end regardless. He whispers in my ear encouragement and holding steadfast to determination.

When I think of my Scottish roots and the turtle, I'm reminded of lessons in overcoming challenges of great or minor consequence. I will only lose if I allow myself to flip over and stop fighting.

Lastly, like the noble and wise turtle, my home is where ever I make it. I do not need the burden of accoutrements, only to lay down and rest safely within.
Brandis Standridge
2/24/2014 5:29 PM
In the 1960's my father did a lot of work in the Mojave Desert as he was a geology professor. Mys mother, brother, and myself would accompany dad and we had many wonderful moments in that beautiful region. One of the more special things we would occasionally come across would be a desert tortoise. It is very rare to find one in the desert now and to me it represents wonderful family times and moments of wonder.
Carolyn Manning
2/24/2014 3:37 PM
Show per page
Sort By