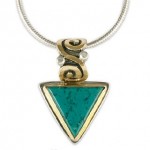 In 1981, in a small Tibetan village in the Himalayas of northern Nepal, I sat quivering in front of Wong Chu, a shamanic practitioner of the ancient Bonpo sect of Tibet. With his drums, bells, fire and chanting, he called in the local spirits on behalf of a sick villager while I watched silently in the corner of his stone hut. He wore turquoise amulets for protection.

I observed several of his rituals, eventually hiring him to do a session for myself in which I made the mistake of taking pictures of him. The gods were not pleased. My camera broke. The two subsequent times I visited the Himalayas, my camera also broke. Perhaps if I had only draped turquoise around the lens of my old 35mm, I would not have had such bad luck.

After completing my research, I left the village and trekked the ancient salt trading routes that connected Tibet to India. I ran into many Tibetan traders with their donkeys, wearing turquoise around their necks and in their ears, often attached with string or silver. The stone, I came to understand, had deep religious significance. Turquoise, to the Tibetans, brought both blessing and protection.

Turquoise has widely been used as a talismanic gem. Bracelets were found on the arm of the Egyptian queen, Zer, 7500 years old. The gem represented the Egyptian gods Amum and Isis. Aztecs, Mayan, Persians and Babylonians are just a few of the cultures that have valued turquoise over the millennia. In Roman times, even leading into medieval Europe, physicians ground up the stone and used it to treat eye diseases and skin inflammations.

The name comes from the French term pierre turquois, which means basically a stone from Turkey—which is from where it likely entered Europe through early trading roots. It became fashionable to both men and women in the sixteenth century.

“Whoever wears a turquoise, so that it or its gold setting touches the skin, may fall from any height and the stone attracts to itself the whole force of the blow, so that it cracks and the person is safe,” wrote Anselmus de Boot, the court physician for Emperor Rudolph II. (Kuntz 221)

Wearing it offered protection, particularly for the horse and rider. A few years after my stint in Nepal, I moved to Santa Fe, New Mexico and took any job I could get. I found myself in the narrow tunnels of a prehistoric turquoise mine just south of town, serving rattlesnake, cactus, and pinot. In between frying up more snake, with terrible cowboy music in the background, I marveled at the piles of tailings, looking for small specks of the sky blue that remained.

Turquoise is a color and gem synonymous with southwest style, fading in and out of popularity every few years. But to the Native people who I met while teaching English at an Indian school, the gem has an entirely different significance. Pueblo people will tell you that turquoise stole its color from the sky. If you are ever privileged to observe one of the traditional dances that regularly take place in the pueblos of Northern New Mexico, you will see turquoise jewelry that will dazzle the eye.

Numerous old stories in Native America exalt turquoise. The stone is a favorite of shamanic wisdom keepers and elders, worn for protection against diseases and for the power. I have also walked the back country and come across shrines where small grains of turquoise have been left as an offering to the local spirits of the land. Some Natives claim that that it can be found in the moist ground at the end of the rainbow and that simply wearing it attracts good things to you.

Across cultures, we can draw a few conclusions. Turquoise is certainly a type of shield. Working with the gem offers a protection. But protection comes from connecting into the energy of the stone which is somehow connected to the energy of the earth itself. Protection is alignment with something that is easily manipulated by the vagaries of the perspective.

Just hold a piece of turquoise in your hand and see what it might teach you about Mother Earth and Father Sky.

References: Most of the historical content, myth and lore referenced in this article came from two books, both of which are in print and available on line: George Frederick Kunz, The Curious Lore of Precious Stones, New York; Dover Publications, Inc. 1913, 1971 edition. Bruce Knuth, Gems In Myth, Legends And Lore, Parachute, Colorado, Jewelers Press, 2007