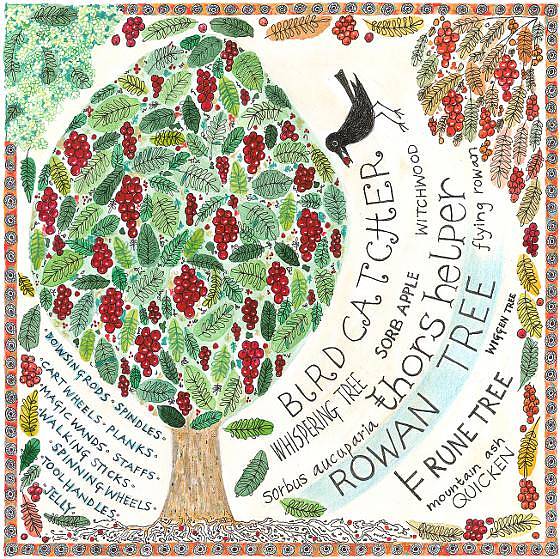 Rowan is the Celtic Zodiac Tree for January 21 - February 17th.

“O rowan fair, upon your hair how white the blossom lay! O rowan mine, I saw you shine upon a summer’s day, Your rind so bright, your leaves so light, your voice so cool and soft: Upon your head how golden-red the crown you bore aloft!” The Two Towers, J.R.R. Tolkien

This time of year, when the influence of winter is waning and the first imaginations of spring are in the air, is when the Rowan Tree is represented on the Celtic calendar. This is a time of subtle beginnings and dreams. Early in February we find the energetic seed of spring, whcih peaks on the vernal equinox. In this context, it makes sense that the rowan tree grows on craggy mountains, or places where the environment is extreme. Mountains represent a more rarified perspective; spirit, purity, and essence.

This is where inspiration can come from. The Rowan Tree’s habitat carries some of that perspective and grounds the spirit into the earth. It produces berries that reveal, on their base, a natural pentagram-- which represents the senses, the sentient, the five pointed star— a symbol of the womb and even, some say, the five wounds of Jesus. The ability to flourish in marginal places, the allure of the pentagram over the eons, is indicative of what kind of medicine and symbolism this plant might hold, for the tree has a long European mythology.

The Rowan was known as the “wayfarer’s tree” or “travelers tree” because it could prevent those on a long journey from getting lost. In this sense, "lost" can mean "disconnected from the earth’s wisdom." The pentagram is a symbol for the Earth Goddess— where ever you walk, she is there beneath you and around you. The Rowan Tree has the ability to protect you from malevolence, witches, sorcery, and witchcraft, and was planted in front of doors or gates in Scotland. In some parts of England, the story was that the Devil hanged his mother on the Rowan Tree.

Yet in Norse mythology, the god Thor was once saved by clinging on to a Rowan Tree. In Wiccan lore this tree is associated with physic insights and visions. Rowan Tree also has medicinal uses. Ripe berries, loved by numerous bird species, are an astringent gargle for inflamed tonsils and sore throats. They were also made into jam, dried into flour and used to make fermented spirits. The wood from the trees, which typically do not grow over thirty feet tall, was used for barrels, bows, and black dye.

Across the Celtic and Norse lands, the tree was viewed as a kind of augury of seasons and harvests. A heavy load of fruit meant that there would not be heavy snow, and vice-versa. Plentiful flowers indicated a plentiful rye harvest. Flowering twice a year was a sure sign that the potatoes would have a bumper crop.

This type of lore may not be accurate from a scientific view, but the stories do show how people viewed the tree as having special knowledge. The Rowan Tree is about being aligned with greater mysteries, the cycles of weather and harvests. It is also a symbol of energy that can help you begin to ground your dreams and inspiration when the spring light is rising from the darkness of winter.