Imbolc: The Celebration of St. Brigid 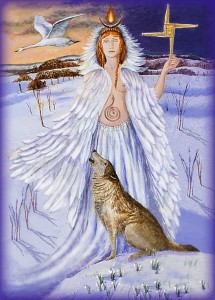 Also called St. Brigid's Day, Imbolc honors the Celtic goddess of fire, fertility, midwifery and the young. February 1st-2nd is one of the cornerstones of the Celtic Calendar, as the first day of Spring heralds the underground movements of renewed life beneath the earth's belly. It was known by the term Imbolc, pronounced "im'olk" (and also known as Oimelc), from an Irish word that was originally thought to mean 'in the belly'-- although many people translate this as "ewe's milk" (oi-melc).

The success of the new farming season was of great importance to traditional Celtic culture. As winter stores of food were getting low, Imbolc rituals were performed to harness divine energy that would ensure a steady supply of food until the harvest six months later. This is still today a significant turning point of the year, halfway between the Winter Solstice and the Spring Equinox. It is a time when the frozen ground begins to thaw, days start to lengthen, the sun appears higher in the sky, and new life stirs. Ewes also start to produce milk.

On Imbolc, many Celts will pay tribute to St. Brigid by arranging an altar and "invoking" the goddess through prayer. As with many Celtic holidays, food and music are essential. Dishes for Imbolc tend to incorporate seeds, dairy and other spring-evoking foods. Celebrants often prepare talismans to use during Imbolc ceremonies-- which they will then keep in their homes. These include a Brideog-- a small straw doll dressed in white cloth-- and a Brigid's Cross, also often woven from straw. Imbolc is a time for spring cleaning. Some clean their homes, take ritual baths, or de-clutter their lives in other ways. This is believed to create space for the goddess to come into people's lives, and for new seeds to take root in the coming spring.