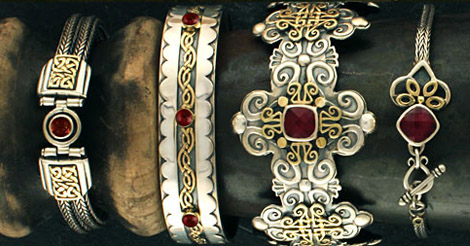 Garnet, January’s birthstone, has been worn for centuries as a protective and powerful talisman. It grounds spirit forces within the body, and helps in the ability to work lovingly here on the earth plane. Yet, Garnet is a sensual stone. It represents primordial fire, the creation of the world out of chaos, purification and love. It is a stone of strong, intense feelings.

Garnet is known as a Stone of Health, extracting negative energy from the chakras, and transmuting the energy to a beneficial state. It has been used to reduce body toxins, purify vital organs and blood, and assists in assimilation of vitamins and minerals. Emotionally, it provides a protective and calming influence during use, and is thought to heal melancholy and depression. Garnet strengthens the survival instinct, bringing courage and hope into critical situations.

The lore of garnets can be traced back to the ancient Greek myth of Persephone. Persephone was the maiden daughter of Zeus-- the most powerful Greek god-- and Demeter, the earth mother whose realm was plants and agriculture. One day, Persephone was picking flowers when she was abducted by Hades, the ruler of the underworld. Zeus sought Hermes to find her and bring her back, but because she had eaten of the pomegranate seed, she was obligated to spend a third of the year with Hades, who became her new husband.

The term garnet comes from the Phoenician term for pomegranate: punica geranatum. From this came the Latin term, "granatus," which translates as "seed." Garnets appear like pomegranate seeds both individually and in their natural matrix, where they can be found in clusters. Persephone's rising up from the underworld and disappearing in the late autumn months represents the seasonal cycles of plant growth in temperate climates. In the winter months, when plants are barren and the earth itself seems to be asleep, Persephone is underground. In the spring, she rises up with to be with her mother, Demeter, who brings the bounty of leafy growth with joy at her daughter's return.

The mythological association of garnets, particularly red garnets, with Persephone suggests that the gemstone might be associated with a particular type of love-- not superficial love, but deep love that takes you so far out of yourself that you end up in a different world. Note that Persephone was not courted-- she was swept down. Once she tasted the underworld, she could never leave; it was an initiation of sorts. Hades, Persephone's husband, inhabits a world in which one is forced to leave one's body behind in ashes. Hades was also sometimes called "Lord of the Riches," because indeed, all riches do come from the earth. Jungian depth psychology and astrological lore associates Hades with cathartic, radical change from deep within. The underworld is a metaphor for the unconscious currents of one's existence-- the dream world, where archetypal characters interact in stories that have mythological patterns.

Apart from the Persephone myth, garnets have been the subject of much lore over the centuries. There is a Biblical story about Noah hanging a garnet around his neck in order to have safe passage through dark and stormy nights, which perhaps accounts for why garnets are sometimes offered to travelers as a talisman for safe journeys. Garnets as named as January's birthstone, aligning with the zodiac sign of Aquarius-- a sign associated with the warmth of friendship and working well with groups of people. The Koran describes Heaven's light as all pervasive, glowing with a garnet structure-- garnets in this case containing a powerful internal energy. Romans compared the glow of garnet to that of coal-- and the passionate red led them to associate the gem with Mars, the god of war.

Garnets are also associated with the hot weather of summertime. Perhaps the lore of garnets also has something to do with how they are formed. Garnets, found in metamorphic and volcanic rock, are formed deep underground in extreme pressure and temperature and are a type of silicate that share a common crystalline, isometric, cubic structure. Though we most often identify them with the color red, they can be found in a wide variety of hues, depending upon the composition of calcium, iron and manganese. Garnets range from green and lemon yellow to rose, orange, and even black. Human beings have used garnets for adornment for thousands of years-- these stones have even been found in bronze-age tombs. According to Knuth, the earliest recorded garnet mine is in Sri Lanka, and dates back about 2500 years.

Today, garnets are mined on several continents. Those that are not gemstone quality are quite common. I remember picking out a small red spot in granite in the White Mountains of northern New Hampshire which I explored as a teenager. If you want to learn more about garnets and your relationship to them, here's an entirely different approach: just try holding a garnet in your hand for a while, and see if you get a new feeling. Perhaps you'll see some image in your mind's eye. Contemplate what you feel and see if it provides any insight. This may seem crazy, but ask the garnet a question. You might be surprised about what a garnet can teach you about your personal journey, picking flowers with your sweetheart, or wandering about in a dream somewhere in the realm of Hades.

References: Most of the historical content, myth and lore referenced in this article came from two books, both of which are in print and available on line: George Frederick Kunz, The Curious Lore of Precious Stones, New York; Dover Publications, Inc. 1913, 1971 edition. Bruce Knuth, Gems In Myth, Legends And Lore, Parachute, Colorado, Jewelers Press, 2007.