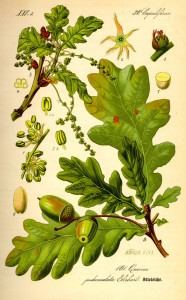 Oak is the Celtic Tree for June 10 - July 7. It is always worth considering the particular time in a seasonal cycle when looking at the significance of a particular tree tied to the Celtic moon calendar. Each time of year has its particular task, from a literal and metaphoric viewpoint. The tree itself is representational of what is most needed as an alliance to support the accomplishment of the task.

The period between June 10th and July 7th are the longest days of the year. They include the time up to the summer solstice, the rising of solar energy, and tipping point when light actually begins to decrease and there is a movement toward declining light, to autumn and eventually winter solstice. First and foremost, this is a time of work. Long days equal long work in a traditional culture. In response to the light, life and growth in the plant world approach a fevered pitch. The work now determines the harvest later.

Consider now what qualities are needed if the work is to be productive. First, strength and fortitude and the ability to interact relationally with our entire community, because growth in our lives and in the greater ecosystem only happens with the support of community. The work in the end should produce fruit (like acorns) that as a gift for the community at large. From this perspective, it makes complete sense that the oak was chosen to represent this time of year.

The oak is a signet for the world tree, or tree of life and is considered especially sacred in Celtic myth and lore. The name of Celtic priests, Druids, derives in part from the root “dru” which means oak. Some scholars call this month “duir” which means door in both Gaelic and Sanskrit. Both Druids and the oak were intimately aligned. They hold an entry way into some other place. The door that the oak holds is stability and integrity when the world is at its maximum energy output.

The Druids were also door keepers to other places, for they held in their understanding a view in which the worlds seen and unseen are intimately related and connected, woven tightly like an endless Celtic knot. When exploring these liminal edges in space and time, the Druids sought out the groves of oak. Ritual and ceremonies were held in oak groves which were said to protect them from spells while amplifying their power. The oak provided a structure for these places of transition, a way of grounding into the heart of the earth that allowed them to travel into the depths of mystery. Though a process of divination, Druidic priest used the rustlings of oak leaves to hear words of the gods. Ritual sacrifice of animals for feasts were held in the oak groves— blood was used to fertilize the tree as an offering. Oak becomes then a place for transition—from life to death. Anything that grew on the oak was especially blessed by the gods. In one elaborate ritual recounted by an a Roman historian, Druids climbed a tree to cut a piece of mistletoe from the oak, which  was cut with a golden sickle during a sacred ritual.

The oaks were also  a safe haven for the faeries, the nature spirits that favored the oaks stability and longevity. When we think of the oak, it is not just the oak, but the mighty oak. Jeremiah said, “A mighty oak tree, majestic and glorious - that's how I once described you. But it will only take a clap of thunder and a bolt of lightning to leave you a shattered wreck.” Indeed, oak trees are struck more by lightening than other trees, making it sacred to both Zeus and Thor. When the oak tree draws down the lightening, is it like attracting light? Or are we to take this brief story as an indication of our own fragility and mortality? Regardless, the oak itself is a symbol for power and courage that we can look toward, particularly when we are engaged in the active constructing of our own destiny.