November: The Reed and the Celtic New Year 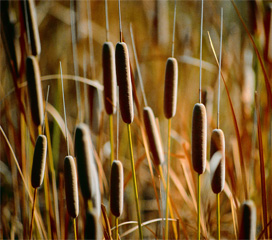 Reeds are large perennial grasses with smooth, flat leaves. They grows in wet areas such as marshlands or streams—often at the edge of distinct ecological zones. Today reeds grow a few yards high, but there are accounts of reeds growing up to twenty feet—almost as tall as a small tree. Reeds stabilize banks, marking a transition point between land and shore.

Reeds have been used to make arrows, brooms, candles and papyrus. Baskets are woven from reeds. Reed-thatched roofs insulated and protected the home—and they were also pressed on the floor to freshen the air. Another important way that reeds were used were related to music—whistles or flutes create a mood or atmosphere, and are even used to invoke the spirits or even call in the fairy folk. Some accounts of Taliesin, the great Welsh Bard, say he tossed into the waters in a reed basket at birth (Read about this birth).

As important as reeds were to indigenous people from a practical perspective, we are left to wonder why this plant was chosen above others to represent this important time in the yearly calendar. The time of the reed corresponds to the Celtic New Year, which falls on October 31st. This time is also linked to Day of the Dead, a period that is across cultures associated with honoring the ancestors. In ancient Scotland, where reeds were burned to honor the ancestors, a broken reed could be read as an omen of betrayal among family.

If you place the entire calendar year on a circle, with winter at the north, spring in the east, summer as south and autumn in the west, the end of October would fall in the Northwest. This period, the time of waning light, could be considered the seed of winter—which peaks on winter solstice, and declines in influence until the beginning of February (which is in turn the seed of spring). Winter solstice is a time in which life on earth, which is fueled by the sun, is in its greatest time of rest. For human beings tied to earth cycles, it is a time of internality, a point of death and rebirth.

If you are intimate with the cycles of light and how they affect you, this time of year is when the land itself supports your efforts to reconcile with the past. The harvest is over. What is left from those efforts to grow? Often, the greatest challenge behind your external issues is what has been passed down through your lineage, your ancestors. What have your mother and father, and their parents, given you? Can you find how these strands create knots inside of you—knots that need to be untangled and accepted in order to start a new year? To link this activity with the Celtic New Year is illustrative of how important and foundational connection with the ancestors is to any beginning. The process of reconciliation can bring a great deal of energy to your life—so much of the internal conflict we experience can be traced back to what the ancestors have passed down to us.

The separation between the end of one year and beginning of the next is a very thin line, like a reed. Lines create a boundary, and boundaries are necessary for us to live and function in community. The line is the most basic element to any Celtic knot. All knots, which represent coherent life-giving patterns or blueprints, begin with lines—either curved or straight. A line crossing another line signifies an intersecting point, a synergy or possibly new relationship. It follows, then, that the beginning of any new endeavor, or New Year, starts with a line—a line that is seeking direction, or purpose, or has no purpose other than to be just itself. Likewise, reeds rise up from the wet muck or river on the surface of our spherical earth in straight (or slightly curved) lines. They are rising toward the light! Metaphorically, earth represents the body and water, the emotions. Therefore, reeds can be used as an alliance to stabilize and foster the right relationship where our emotions meet our own corporal body.

Energetically, this time of year is one of the easiest for meditation and prayers—because life’s activities, which peaked on the summer solstice, are on the wane as winter approaches. Bring the quietude of the land inside your heart. It is a good time to set intentions and to pay attention—to walk the land and listen to how what is inside of you, your inner landscape, connects and harmonizes with the greater earthbound cycles through which you live and move.