My Day of the Dead Gold and Silver Skulls 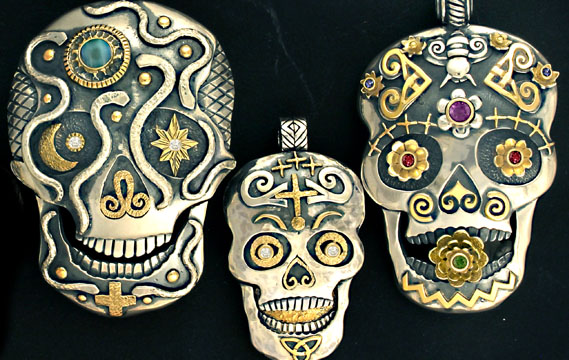 I grew up in a small village in England.  On Halloween, my mother would throw a party in the garage. She painted witches on the wall that would be there all year but seemed to suddenly come alive at Halloween.  We’d have our friends over and we’d bob for apples, and play games in our wild costumes. We didn’t have trick or treat or pumpkins back then.

Next to my house in England there was an11th century church with a creepy graveyard. We used to play hide and seek in it and build dens amongst the grave stones.

Growing up in a small country with 1000s of years of history is different than living in the US. On every square inch of soil someone has died in a million different ways.  Just over the hill a few villages over there was a church standing on its own-- a bleak reminder of the plague.  Many people in New Mexico have this kind of history tied to the land, but for most of Americans we don’t the weight of those thousands of years connecting us to place that hold stories of those who have gone before.

Halloween, which in England is tied to the ancient Celtic tradition of Samhain, is the time when those that have passed come closer. A liminal time.  A time to celebrate with our ancestors. A time of mischief as we play with death. A time when we can play with the edges of something that affects us all but have absolutely no control over. For me making these skulls ties into this mischief and festivity.

I worked on cadavers as an anatomy student. I have visited Guanoato in Mexico, with it’s very ghoulish mummy museum, the killing fields in Cambodia and an amazing bone chapel in Evora, Portugal. Crossing paths with death in this way always awakens the mystery.

Making these rather outrageous characters was really fun.  First I made the skull bone shapes with layers of metal, a saw, files, and domers with a focus on contour, form and feel. Slowly the shape of the face emerges.  Then with embellishment the characters would reveal themselves.  They emerged so easily I could have made more but they took a long time to make and I ran out of time.  It’s a great feeling to be in the flow of creation.

To me these skulls are a celebration of life, the whole of life.  They definitely can push the edge a bit. When I told a friend what I was doing she responded with “Why are you wasting your time on this!”  But for me this season playfully reminds us of our own mortality, playing with the edges of life.  The things that scare us a little or a lot have always intrigued us humans.  Here we have scary with celebration- a much better combo.  I had a great time making these characters come out of those bones!