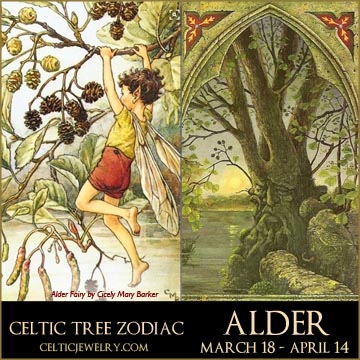 In the Celtic Tree Zodiac, Alder is the wise spirit for March 18 - April 14. This is a time of rebirth, sunrise, initiation—and indeed, resurrection. Alder is the tree which fairies love. These nature spirits appreciate the beautiful and subtle; the play and celebration of life coming back from the soil. There is also the flowering, the vitality of new energy, the dancing and flowing of water, the emotions and exuberance of life.

The wise poet Talisan, son of Ceridwen, posed a riddle: “Why is the Alder purple?” During the Battle of the Trees, Gwydion, the hero trickster from Welsh mythology, answered: "Because Bran wore purple." Bran, also known as Bran the Blessed, was a great giant and King of Britain in Welsh mythology. Apparently, during the battle of the trees, Bran carried alder twigs.

We can discern just from this detail in these myths, how important the Alder is in Celtic mythology. Alder is a signet of the Blessed king, who used it in battle for protection. This symbolism is reinforced by the time of year which the Alder represents in the Celtic tree calendar—just before the spring equinox in March through mid-April.

The spring equinox is the time of year when light and darkness are equally balanced— and balance is critical for any just king. This equipoise between seasons is like an open door. We feel the seasonal shift in our cells and bones when we go outside feeling the plants respond to sunlight and the heartbeat of the earth.

In context to the zodiac, we leave the watery fluid time of Pisces, and enter the fiery intensity of Aries. This is a time when the energy gathered in the winter months, the illusive images from the dreams in winter finally emerge into the light of day. This is a time of rebirth, sunrise, initiation, and indeed, resurrection.

In context to the stories and seasons, we can begin to create a more nuanced and complete view of the alder in its relation to the Celtic calendar. Alder was associated with the warrior. It was in the front line in the Battle of the Trees— a poem in the book of Talisan in which Gwydion brings trees to life to fight a battle.

Alder, front of the line, formed the vanguard
Willow and Rowan were late to the fray.

Yet, at the same time, these qualities are balanced by Alder’s link to completely opposite energy. It is the tree which fairies love. The qualities of the nature spirits include the appreciation of beautiful and subtle; play and celebration of life coming back from the soil.

There is also the flowering, the vitality of new energy, the dancing and flowing of water, emotions and exuberance of life. The qualities of the warrior and fairies are integrated in part with the Alder’s connection to Cronos (Saturn). This archetype deals with structures, foundations, time, history, the element of lead, agriculture, the old man or “senex” consciousness. These are the very qualities that support the building of strong foundations during a time of rapid growth. In certain parts of Ireland, the Alder was considered so sacred that people could be punished for cutting it down.

Yet this tree had many practical uses that made it critical for communities. Apart from its medicinal uses in treating inflammation, burns and skin disease, one of the qualities of the wood is that is water resistant. The tree often grows near lakes and rivers—its roots are actually in water. Because its oily timber resists water, Alder wood was used in creating foundations for medieval cathedrals and pilings in parts of Venice. It was also used to make bridges. Bran at one point made his body into a bridge to cross Shannon River in order to invade Ireland to help his sister, Branwen.

Again, the theme of balance: earth and water, the physical and the emotion, are held by Alder. When cut, it changes color from white to red or purple. Red is the color of fiery coals and transformation, while purple associated with royalty and resurrection. Yet in times of great changes, the critical issue, and even the success of a particular endeavor, depends upon maintaining balance.

It makes complete sense why the Alder was chosen to represent the time between March 18 and April 14th. The Alder tree, its strong and powerful wood, embodies the qualities necessary to navigate in these times of great transition.

The Song of the Alder Fairy
by Cicely Mary Barker

By the lake or river-side
Where the Alders dwell,
In the Autumn may be spied
Baby catkins; cones beside —
Old and new as well.
Seasons come and seasons go;
That's the tale they tell!

After Autumn, Winter's cold
Leads us to the Spring;
And, before the leaves unfold,
On the Alder you'll behold,
Crimson catkins swing!
They are making ready now;
That's the song I sing!