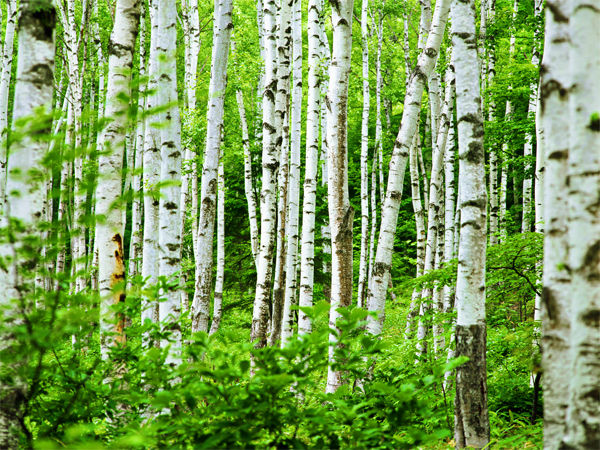 Birch is the Celtic Zodiac Tree for December 24 - January 20.

For six months, light has been decreasing, leading up to the solstice, the darkest time of year. Some of us have perhaps spent a few days reflecting upon the essence of what has been garnered over the past season. Now we move from the Elder tree to Birch. To glean the choice of Birch, we have to start with the time of the year. It is just a few days after the winter solstice, but this time is a major shift for those who attuned their spiritual life closely to the movement of earth and light.

The birch tree signifies starting over, a new growth cycle that begins with that first impulse in winter dream time, appearing ever so faintly in the rising of the light. Though we are in a new year, this is not a time to rush forward and outward. Spring, which is a time of external expression of our creative endeavors in the eastern light, is months away.

Go easy now and listen closely. Let the land and the season infuse your mind, wondering, “what is this very soft, gradual light, rising so imperceptibly, illuminating for me now?” Can you discern the outline of what at first may be as subtle as a shadow in the soft, ever-present light? In order to step outward into the light of April in a way that is most aligned with our destiny requires that we embrace this time, the Birch month, as one of stillness and contemplation.

Part of the solution is to seek wisdom from the ancestors—which is why, in traditional indigenous cultures, stories were told this time of year. Stories root experiences in cultural context and allow the listener to locate herself, somehow, in the path. This brings us back to the birch tree, chosen to help us understand this time of year.

Let’s start by looking at how birch functions in the environment, and then apply it to what we know of the season. Birch is a strong, flexible wood. It is does not bend like a reed, but rather has a frame upon which foundations can be built. In nature, birch thrives in transition zones, between wood and field. It also has an intimate relationship with fire, for it grows very well in charred landscape. It is a pioneer plant, taking root first. Birch represents, then, the regenerative qualities that are necessary to begin something new after having gone through a year.

Yet for birch to thrive, the landscape must also be empty. This means, internally, that the New Year’s work is easier to see and understand when there is resolution of past events and a clean slate. Birch is then able to take root in an environment that would be marginal for other trees—not much light and little companionship or community outside of its own kin.

A few other notes about birch traditionally: in the Wiccan lore, a red ribbon around a birch tree’s trunk will ward off negative energy, and birch twigs are hung over infants to protect them from bad energy. Birch also has profound medicinal use. Wintergreen from its sweet bark is an analgesic that can be used to reduce pain in the stomach and digestion. Birch also contains methyl salicylate, which has qualities similar to aspirin and can be used as a pain reliever.

So, as a medicine, for this season, birch is a good alliance to work with when you are starting over this New Year. It is especially potent if your own personal landscape has been destroyed or wiped clean by fire or some other drastic change, for it can help you muster up courage as you move with vision for a new world.