Ceridwen, The Mother of Poetry and Wisdom 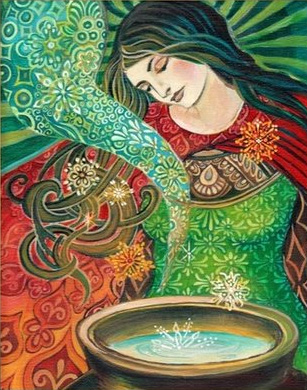 The steam still rises from Ceridwen’s cauldron. She is the mother of poetry, wisdom and prophecy, the triple goddess of Maid, Mother and Crone, shape shifting between life and death. Long, long ago, when the gods and goddesses roamed about the earth, visible to men and women, the White Crafty One, Ceridwen was married to Tegit Foel, the giant deity of a Bala lake.

They had two children—first a beautiful daughter and then, a son. That son was named Morfran. He was so repulsive to gaze upon, so ugly, that he was called Afagddu ("utter darkness”). Ceridwen would give him special powers. She would make him wise, overflowing with poetry and inspiration and for this, she needed a potion. Morda, a blind man, was to tend the fire, while Gwion Bach, a young boy, stirred this gift called, Awen.

Perhaps the cauldron was brimming with the oily light of stars, seasoned with the heart of regenerative joy, the labyerinths of infinite black nights, the sweet and bitter songs from rock and water, the elixir of spirit that can shred and make whole again. Life with all its paradoxes inherit in light and darkness, the seeds of wisdom that spring from the mysteries of contradiction—needed to cook a good long time—a year and a day to be exact. When it was ready, three drops would bring you wisdom but even a drop more than that would kill you. After many days of attentive care, three drops spilled on to Gwion’s thumb.

The pain from the boiling liquid was sharp and he immediately put it in his mouth—thus gaining the wisdom that Ceridwen had intended for Morfran. He knew Ceridwen would be in rage and he fled, using the powers of the elixir to change himself into a hare. Ceridwen shape-shifted to a greyhound, in pursuit. He turned into a fish, jumping into a river; she, an otter. He, a song bird; she, a hawk. Finally, he turned into a kernel of corn and she became a hen, finding him and eating him with little effort.

Yet soon, Ceridwen became pregnant, immediately knowing Gwion was in her belly. Though she was resolved to kill him, when he was born, he was so beautiful that infanticide was impossible. Instead, she sewed him in a leather bag and tossed him into the ocean. In Wales, near Aberdyfi, Wales, by Prince Elffin ap Gwyddno was walking along the shore and found the bag. He opened it up and saw the magic child whose forehead was white, like his mother’s. Immediately, the baby recited this poem:

Fair Elffin, cease your weeping! Despair brings no profit. No catch in Gwyddno's weir Was ever as good as tonight's. Let no one revile what is his; Man sees not what nurtures him. Gwyddno's prayers shall not be in vain. God breaks not his promises. Fair Elphin, dry your cheeks! It does not become you to be sad. Though you think you have no gain Undue grief will bring you nothing, Nor will doubting the miracles of the Lord. Though I am small, I am gifted. From the sea and the mountain, from rivers' depths God sent bounty to the blessed. Elphin of cheerful disposition— Meek is your mind. You must not lament so heavily. Better God than gloomy foreboding. Though I am frail and little And wet with spume of Dylan's sea, I shall earn in a day of contention Riches better than three score for you. Elphin of the remarkable qualities, Grieve not for your catch. Though I am frail here in my bunting, There are wonders on my tongue. You must not fear greatly While I am watching over you. By remembering the name of the Trinity None can overcome you.

He was given the name of Taliesin and was raised by Elphin and his wife with great love and happiness. Their wealth increased through all the days. Taliesin grew up to be greatest of all bards, and sang the ancient and true songs of wisdom in the court of King Author. You can still hear his songs if you put your ear to heartbeat of the earth and feel the steam rising from Ceridwen’s cauldron. For Taliesin and Ceridwen, the mother of poetry, wisdom and prophecy, the triple goddess of Maid, Mother and Crone, lives on even now, shape shifting between life and death.