Cernunnos, The Antlered God of Power and Blessing 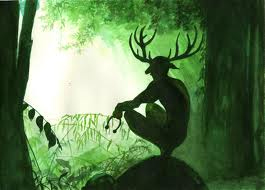 Cernunnos is the antlered god, part man and part stag. He is born on the darkest day of the year, winter solstice, and marries the goddess of spring, Beltane. About six months later, on summer solstice, he dies. In Celtic lore, he is often depicted sitting cross legged—the position of a meditator, or teacher. His actual name comes from the 1st century Pillar of the Boatmen.

Among pagans, he is considered the god of fertility, animals, and wealth, and the underworld—sometimes he carries a purse filled with coin, for wealth. This connection to wealth and gold coins is found in the myth about Pluto (Hades), the god of the underworld, from which all wealth comes. Indeed abundance comes from what is deep in the earth and deep in our own psyche.

Every part of iconography is significant in images of gods and goddesses. The most notable figure of Cernunnos is from the Gundestrap cauldron, where he is shown holding a torc and serpent. A dog, raven, stag and other creatures surround him. These are his alliances and we can learn something about the nature of Cernunnos by studying the essential qualities that these other animals might represent. Another image dating back to Tiberius shows him as an elder—balding, with stag’s ears—the power of this god is associated with balding eldership, aging, a wise old man, a senex figure. Hair is associated with masculinity and virility. Yet, wearing antlers is an honor that requires a level of groundedness and refinement, earned over many years.

Sometimes the torque, a powerful status symbol, is depicted hung on each antler. Deities commonly are adorned with jewelry—particularly in Hindu and Tibetan iconography. In the Celtic tradition, torques are elaborate status symbols, thought to contain the power to ward off the curses of enemies and maleficent sorcerers, as well as to provide protection and courage during battle. Torques symbolically represented essential aspects of a Celt’s relationship to his community and the universe as a whole.

We have a few stories of Cernunnos that circulate in contemporary pagan circles. He is born on winter solstice and dies on summer solstice. This suggests his association with the rise of energy, augmentation, the increasing of light, lengthening of the day and peak experiences. He is a god associated with the potency and power of male sexuality, but not its completeness. Falling on the ground, broken, limp, is just as important an experience of the male psyche as standing erect. Also, the fact that he dies at the peak of light, the second half of the seasonal cycle brings, means that he does not hold the introspective qualities that the harvest brings and the completion of the diminishing of light.

Perhaps Cernunnos is balanced somewhat by his marriage to the goddess of Beltane. She is celebrated in a time when blessing comes from rubbing yourself with the dew of early May morning to soak in the blessing of Spring. Helen Chantler, the designer of our company, remembers watching the horned man in the forest on her BBC television growing up. It was an image that conveyed guardianship and the protector of the forest. Yet this image of the antlered man, so powerfully associated with Celtic myth and lore, has been widely depicted and enacted across indigenous cultures for thousands, or perhaps tens of thousands of years. Iconography of an antlered man, standing, have been found in French Paleolithic cave paintings.

Nearby my home in Santa Fe, I have wandered through thirteen century petroglyphs, half man, half stag. A pueblo man told me that contained within the antlers of a majestic buck were all the blessings of the universe. As someone who has watched beautiful bucks in the mountains and forest, I know this is true. This idea remains important in ceremonial cultures.

Even today, Native dancers bless their community by becoming deer or buffalo at ceremonial occasions, wearing the horns of the animal and dancing to the drums’ heartbeat. Today, many worship Cernunnos and want his power without consciously knowing even the name of this god. Hunters will pay thousands of dollars to kill the biggest buck and have antlers on the wall.

There is much that can be said about ancient intimacy between the hunter and hunted, though much of the sacredness, the divinity of the animal, has been lost. Antler fetish is perhaps a modern way to try to possess or own a shadow of Cernunnos, a connection to animal and wildness illusive in today’s highly domesticated culture. Nature has, too often, become a commodity and the suffering we and many other animals feel today for that foolishness is rising. If you read hunting magazines, you’ll soon understand that antler size is a far cry from the notion of wearing antlers on the head, moving about in the consciousness of the animal, seeing the world through the buck’s eyes and assuming the weight of that blessing. In that context, becoming animal, is becoming a god.

Cernunnos, like the stag, carries the beauty of what it is, just as it is by bridging human and animal. To honor this god today requires an intimacy with all that we are related to—an experience that few today even can begin to understand.