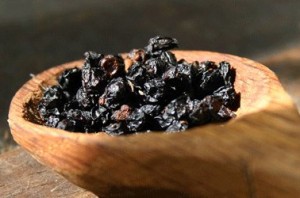 The Elder tree embodies the seasonal energy of diminishing of light, the last leaves dropping, the plant’s concentrated essence sinking into the root, the quietude and mystery of the earth itself in a wintery landscape. This is a time of endings and beginnings, the least light and the return of the sun toward a longer day...completion and rebirth. It is a time when there are fewer distractions and the boundaries between the unseen and seen are thin. It is a story time.

The Elder tree itself has a strong connection to the feminine and the Goddess. It was called “Our Lady,” and was sacred to the wise old woman—the crone—the one who had extracted experience, knew earth medicines, and lived in essence. The power of this tree, its essence, is illustrated by how it has been used.

There’s probably no symbol more resonate than Jesus’ cross, which was said to be made of an elder tree. Judas was hung...on an elder tree. The trees were also used to make protective wands and in Ireland, witches brooms. On the Isle of Man, where elder trees are prolific, it is called tramman, or “fairy tree.” These fairies were particularly responsive to flutes made of elder wood– they could assist you with what to keep and what to toss away, lightening your load to cross the threshold into something new (and perhaps unimaginable).

The tree has clusters of white flowers in June and July, which turn into black or red berry-like fruit August through October. The flowers and fruit were made into jam. Traditionally, elder berries were gathered in December with great ceremony, as they helped with clairvoyance and were considered a sacred gift from Gaia.

Tea and other extractions made from elders were used to treat hay fever, colds, and bruises, and to purify the blood. Leaves were used to create insecticide and applied as compresses to wounds. Berries could be used as a laxative. The wiccan tradition around the Elder tree is extensive. Headdresses made from woven elder twigs enabled the wearer to see into the other worlds and as a shield to protect from evil. For this reason, they were tossed in graves, worn in a small bag around the neck, or even held in bags above doorways.

It was well accepted that if you were to take a branch off the tree for ceremonial purposes, you should make an offering in exchange–watering the tree, or giving something back. Before cutting a branch, it was said, “Lady Ellhorn, give me of thy wood and I will give thee of mine when I become a tree.”  This custom of intentional exchange is based upon a spirit to spirit relationship and a view that everything is alive, which is common with indigenous people all over the world. In Celtic tradition, this recognition, this honoring of this tree being, was particularly important with the Elder tree.