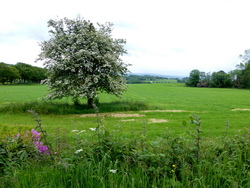 This time of year the dose of sunlight rises each day toward the long fuse of Solstice. In the Celtic Tree Zodiac, the period from May 13th to June 9th is represented by Hawthorn—or huath as it was called in old Irish. In the most general sense, this time of year, also known as the Hawthorn moon, is associated with fertility—and also the rising of light, suggestive of male sexuality. “Ne'er cast a cloot til Mey's oot," it was said. Don’t take off your cloots (clothes) until the May blossoms (hawthorn) appear.

Indeed, the Hawthorn moon follows right on the heals of Beltane—though in many Celtic lands the flowers were not in bloom until early June. Like Ash and Oak, Hawthorn strongly attracts the Faerie, plant spirits and nymphs, the magical realms at the edge of vision where the wee beings ease in and out of the seen and unseen worlds. Hawthorn trees were considered guardians of springs, the clear cool water from the belly of the earth that rise up as blessing. Hawthorn flowers, many believed, can help our prayers reach the heavens.

The Greeks were said to have carried Hawthorn as a symbol of hope in wedding processions. Among many, however, blossoms that were used to decorate houses were not always welcome and children were scolded for bringing them into the house. Even today, Hawthorn is considered by many to be an unlucky plant, associated with illness and death. The Hawthorn taboo might well be traced back to the days of medieval London and the plague. Rotting Hawthorn flowers smelled like death. In fact, trimethylaine, found in flowers is the same compound found in decaying animal flesh. Interestingly, in ancient prehistoric buries, Hawthorn was tied to the dead bodies.

The ambiguity of the Hawthorn symbolism, life giving and death is interesting in context to Jesus’ crown of thorns made from Hawthorn. The crown is a symbol of the king, the embodiment of divinity on earth. Jesus is associated with rebirth, the “new story” (spring). The thorns and the consequent iconography of blood dripping down his forehead portends death. The Hawthorn crown is a rich and mysterious symbol interweaving both Christianity and Paganism.

Hawthorn has many practical uses. The tree itself can be as tall as sixty feet and grow to be hundreds of years old in forests and hedgerows. The wood is extremely hard and was used as handles for tools, staffs and even magic wands. Blossoms and berries make jellies and wine. New leaves were eaten off the bushes, and commonly called, “bread and cheese.” The plant was also used to create a variety of medicinal concoctions that were used for blood pressure reduction, circulatory disorders and migraine. More specifically, flowers can be concocted into sedatives and the berries, which contain vitamin C and B complex were helpful for dysentery and problems with the kidneys.

Hawthorn is extremely resilient and can grow in even poor soils. It supports a wide community, particularly in the ecology of hedgerows which so important. They provide nesting places for a wide variety of birds, providing a habitat for wood mice, worms, toads and a wide variety of insects, including the impressively large May bugs or cockchagers. This strong interactive or relational quality of Hawthorn for humans is augmented by the time of year, the increase of light toward solstice. The roots are strong and gnarled. Its wood hard and powerful. The flowers--full of beauty and mystery—a symbol of life and death. Overall, the Hawthorn's intimacy and support of its community can help ease our weaving together the infinite patterns which guide our lives.