Wicked Good: 15% Savings on our Day of the Dead Collection 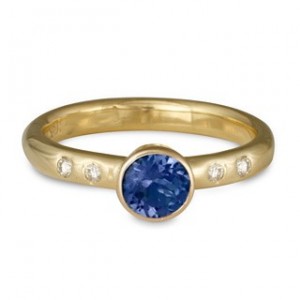 Sapphire makes a wonderful alternative to diamond. When chosen for a wedding or engagement ring, it can assist in creating a balance of power in a relationship—helping couples communicate in a way that takes responsibility for each individual's own thoughts and actions.

An old Vedic story from India describes the demon god, Vela, ripped apart by demigods. His primordial body tumbled through time and space to the solidity of earth, shattering, like glass. His eyes, cobalt globes of fire and fury, broke apart in a million pieces, many of which landed in the village of Ratna Purna, Sri Lanka—where even today we source our ethically mined sapphires from a cooperative of small-scale miners. Vela represents the cathartic, primordial, untamed forces, the creative destructive elementals that formed from light and stardust, the earth and our body. That blue sapphires formed from the eyes of Vela might have something to do with sapphires being used as an "eyestone" to treat eye disease throughout the centuries. Egyptian physicians created an eye wash with sapphire, copper oxide, and boric acid.

Medieval texts also refer to sapphire as an elixir for the eyes, particularly when dissolved in milk. The Vela myth also suggests that the gem might be used as a type of shield to protect oneself from harm. Corundum, which is the family of gems from which sapphires come from, has a hardness scale of nine out of ten on the Mohs scale. The gem exists in many different shades of color. The skin of the demon became yellow sapphires. Damigeron, an Arab who wrote the earliest Middle Ages treatise on gemstones, wrote that sapphires were worn by kings as a protection from harm. Sapphire was also considered an antidote for poisoning, as long as you chose the right gem. Wolfgang Gabelchover, a medieval writer, suspended a sapphire over a spider, swinging it like a pendulum. If the spider died then the stone was a good antidote. This theme was picked up by other writers who thought sapphires were a good cure for venom. It became a favorite for the practices of necromancers who used it to understand even obscure oracles (Kunz 104). Sapphire is an important Vedic healing gem. In Sanskrit, sapphire is known as "sanipryiya," which is "dear to the planet Saturn." Saturn energy is about control, order, and rules of society, so Sapphire is thought to help when we are dealing with control issues. Placed on the throat, sapphire is also known to release frustration and aid in self-expression and speaking your truth with integrity and compassion.

Sapphire in the Bible

The Latin term for sapphire is, sapphire; in Hebrew, it is sappir. Ancient texts refer to sapphire as a blue stone, which means that its characteristics were at times confused with lapis lazuli. Sapphire is listed as the second foundation stone in Revelations XXI: "Its color is similar to that of a clear sky; struck by the rays of the sun, it sends forth, burning, a flash of lightening, signifying the hope by which we are carried off to heaven." The gem is associated with the apostle St. Paul by the eleventh century bishop Andreas of Caesarea. Pope Innocent II had his bishops wear sapphire rings. The color of sapphire, blue, is associated with divine law, order and structure. Consider who is wearing blue uniforms even today. Dark blue represents a law. Sapphire can protect from curses or the "evil eye" which confuses or distorts the way. If we become toxic it is surely partly because we do not have clear vision of the proper order of things.

The Structure and Meaning of Sapphire

Consider, finally, that sapphire is also a hexagonal crystalline. Its nature is associated with the number six. Two triangles are brought together to form a new shape that represents our physical existence on earth. Harmony and community are also associated with the number six. According to tradition, the number six represents Solomon's seal, a way of mediating and coming to resolution and balance after indecision. In nature, the hexagonal shape is in honey combs of bees. Apart from its sheer beauty, it is easy to understand why this gem has been desired for thousands of years. To hold a sapphire in one's hand and listen to its energy might be a kind of healing, through vision, helping one find truth in the journey toward the Kingdom. References: Most of the historical content, myth and lore referenced in this article came from two books, both of which are in print and available on line: George Frederick Kunz, The Curious Lore of Precious Stones, New York; Dover Publications, Inc. 1913, 1971 edition. Bruce Knuth, Gems In Myth, Legends And Lore, Parachute, Colorado, Jewelers Press, 2007.

View our Sapphire Collection! And remember—we can substitute sapphire in ANY of our designs.