The Meaning Of Celtic Knots - Part 1

You can understand the meaning of Celtic knots yourself. Circles, squares, triangles and crosses create the motifs found in Celtic jewelry. These patterns and shapes actually have certain functions in the physical world. In Celtic knots, shapes are combined. Crosses are made out of triangles and trinity motifs, for example. Yet a basic understanding of the meaning of basic shapes will enable to understand for yourself how to interpret meaning in your ring, pendent or any other piece of jewelry.

The Line: It seems pretty obvious, that everything starts with an individual point of view, a line or vector that is a trajectory toward a certain destination. Lines are the basis of any Celtic design. In Celtic jewelry, a line can be straight, curved or irregular. It can have an ending, or it can connect with other lines and be endless, representing eternality. Lines in Celtic jewelry design are the elements from which knots are made. (This piece shows the complexity of lines intersecting lines to create a beautiful design.)

Cross Motifs: From the line, the most basic element of any piece of Celtic jewelry knot work is the crossing of two lines. Any time that two separate paths cross, you have the possibility of a new perspective. Look at the lines in a piece and decide in a general sense whether the pattern flows with harmony, or is it more jagged with points, suggesting a rich and potent discord? 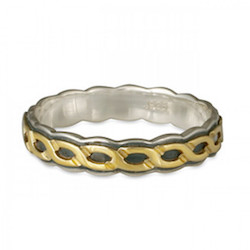 (For example, in this ring, the simple crossing of the line suggests harmony and balance, the coming together of two perspectives.)

Circle Motifs: The most basic knot is circular or has parts of circles. Consider, now, what a circle symbolizes. Look around you right now with your round eyes and see all that is in the form of the circle. We speak of a circle of friends and the cycle of the days and seasons. Certainly circle teaches about equality and community. Circles are cohesive wholes that allow life to exist as it is. (This image of the circle is made up of spirals.)

Wave Motifs: Parts of circles – the arcs – form wave like patterns. Waves are fundamental expressions of all that exists. Particle physics states that matter itself exists in waves. On a more basic level, remember what it is like to be in the ocean and feel the steady rhythm of waves. Waves represent steady, regular movement and flow over time. Celtic Nature Motifs: Not all designs from the Celts were knots. The movement and flow of water, or the curl of roots and vines, were common in Celtic motifs. Some of these designs seem particularly contemporary today, even though they are ancient. Heather, yes, definitely! Would you be able to please give us a link back to our website as part of your post, for the authorship? Thanks so much!
Celtic Jewelry
11/24/2016 1:54 AM
This really shows that you can still find people who value the things they submit on the internet. I actually loved reading the comments.
salena2785
6/12/2015 11:15 PM
Pretty! This wass a really wonderful article. Thanks for providing this
information.
Bio Testosterone XR review
3/8/2015 11:37 PM
I actually blog likewise and I’m authoring a little something related to this excellent blog, “The Meaning Of Celtic
Knots - Part 1 | Celtic Jewelry”. Do you care if perhaps Imake use of some of your personal suggestions?
Thanks for your time ,Madonna
Heather
11/6/2013 2:12 PM
Very interesting topic , appreciate it for posting . "Genius is of no country." by Charles Churchill.
wedding jewelry wholesale
7/30/2013 5:45 AM
Very interesting. Would love to learn more.
Amanda Carter Hardin
12/27/2012 11:32 AM
Show per page
Sort By