How do you understand the meaning of a knot? What attracts us to a particular motif is often mysterious, but you can perhaps gain some insight based on these interpretations.

Square Motifs: Squares are not all that common in nature, be we as human beings do depend upon them. Look at where you see squares around you and you will understand how this blue print concerns structures and foundations. Also, squares are said to symbolize the five senses-four points and the center. 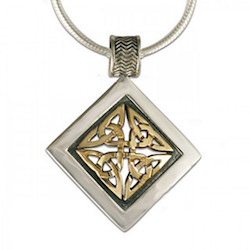 Triangular Motifs: In nature, you find triangles in the features of birds, the tops of waves and the end of leaves. Humans use triangles to create arrows and to create pyramids. You can begin to see how a triangular pattern, or vectors, might suggest focused energy directed toward a specific point.

Spiral Motifs: The spiral is an ancient motif that is found all over the world. Spirals are actually elements of spheres, which are three dimensional circles. Consider how events in your life may outwardly appear the same, but over time, your view changes. Spirals represent growth or evolution in your own circle walk, which is another way of saying, your life journey. 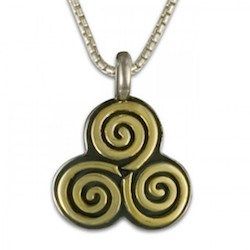 Trinity Motifs: Trinity motifs are common in Celtic jewelry designs. Many religious traditions, of course, have their own profound understanding of what the trinity means. Basically, from the most universal perspective, the trinity represents Unity that is divided into two parts, male or female. The Celtic trinity symbolized the mother, maiden and crone; earth, heavens and the underworld; and the past present and future. 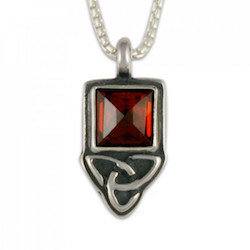 Celtic Crosses: The image of the cross is ancient and predates Christianity. A basic and universal perspective of the cross is that it symbolizes the intersection of human and divine. The vertical axis of the cross represents the heavens, while the horizontal signifies the manifest world.

Look at one of the jewelry knot motifs. Imagine that you are riding on its track. How does it feel? Next, consider the shapes and begin to interpret the symbolic meaning based on some of the ideas mentioned above. Finally, consider what the knot motif might teach you about your life now.